Stephen Joel Trachtenberg earned an MPA, served in the federal government, worked in the nonprofit sector and made influential contributions in public policy. He served for nearly two decades (1988-2007) as university president, and during his tenure transformed the George Washington University.

Today, Trachtenberg serves on many academic, civic, corporate and international boards, and he is a member of Phi Beta Kappa and the Council on Foreign Relations as well as a fellow of the American Academy of Arts and Sciences and the National Academy of Public Administration. He earned his BA from Columbia University, his MPA from Harvard and his JD from Yale.

Steve Trachtenberg’s lifelong contributions in all sectors of public service make his name a superbly fitting one for the school devoted to public administration, public policy and the nonprofit sector. 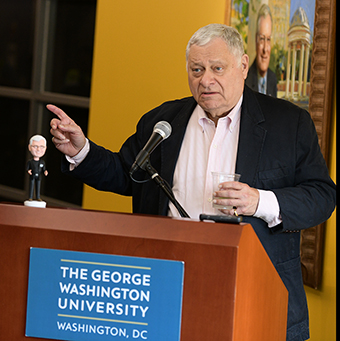 "I believe in the Trachtenberg School's mission. Public service is empowering. Learning about the process of governing our nation makes the country and democracy stronger."

Over the course of his career, Stephen Trachtenberg held several leadership roles in the U.S. government:

In the nonprofit sector, his record of leadership at other private universities lead to his becoming the 15th president of the George Washington University. Under Trachtenberg’s leadership, GW:

Trachtenberg has contributed significantly to conversations about higher education policy as well as higher education leadership. His views on higher education have been published in a variety of publications, such as Academe, Chronicle of Higher Education, The Washington Post and The New York Times.

He has also co-edited The Art of Hiring in America's Colleges & Universities, Presidencies Derailed and Leading Colleges and Universities.

His public service garnered many awards, including the Open Forum Distinguished Public Service Award from the U.S. Secretary of State and a Medal of Merit from the U.S. Department of the Treasury. At last count, he has been awarded more than 20 honorary doctoral degrees.